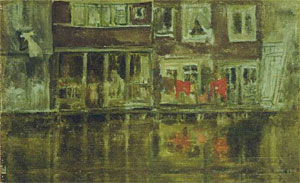 This is the same view as in the etching Square House, Amsterdam. Whistler rarely painted and etched the same scene, but he did so at least twice in Amsterdam. He sketched the scene first, in black crayon on the grey panel. The oil is a rough sketch in vibrant reds and browns, stressing colour and mass, rather than the intricate web of detail and texture seen in the etching. Nocturne: Dance House also shows the same building.