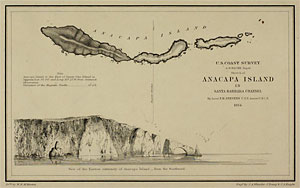 
Before leaving America to study art in Paris, Whistler trained as an etcher at the U.S. Coast and Geodetic Survey in Washington, DC. Anacapa Island off California was surveyed by a naval officer, Lieut. T.H. Stevens.1. Whistler was one of three draughtsmen who etched the copper plate for publication in the Coast Survey's Report in 1854. It was reproduced later, in different formats, which require further investigation.