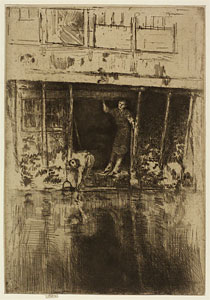 Pierrot is a clown-like character from the Italian Commedia dell'arte, popularised in France by painters such as Watteau. With renewed interest in the Rococo style in the 19th century, artists identified with the enigmatic and poetic figure.1. Adolphe Willette (1857-1926) illustrated sombre narratives featuring Pierrot in Le Chat Noir from 1882-1885 and in 1888 established a magazine, Le Pierrot, satirising Montmartre life and cabarets.

Here Whistler presents the figures as though they are acting on a stage.