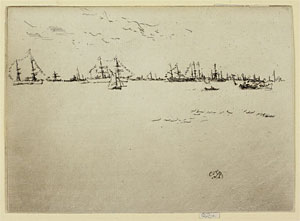 Distinguished visitors watched the Review from massive troopships. Whistler had printed eight impressions of Troop Ships by 19 August 1887, nine on 25 August, and thirteen on 1 September. A note adds that at least thirteen (there was a query about another one) were still available on 26 September.1. Whistler did not sell many - six were left in his estate and passed to his sister-in-law Rosalind Birnie Philip.