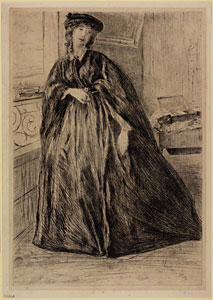 
Josephine Durwend ('Finette'), a dancer at the Bal Bullier and Bal Mabille in Paris, led a dance troupe that brought the can-can to London in 1867. Some writers suggest she was Whistler's mistress but there is no proof of this; his partner was a grisette, a seamstress called Eloise ('Fumette').

The etching is dated 1861. The silk 'domino' (a hooded cloak) over Finette's dress, and the mask on the table suggest she has been to a masked ball, possibly during the Carnival season in Paris. She posed in her fifth floor apartment on the Boulevard Montmartre. A distant view of Paris is seen through the window.

Whistler owned a photograph by Nadar showing Finette as a demure beauty, but other photos accentuated her figure-revealing costumes.1.

Whistler developed this large drypoint over at least ten states. The portrait appealed to connoisseurs not only because of its beauty and rarity but also because Finette was a star.

After removing lines from Finette's face, hair, and hands, Whistler cancelled the plate with lightly incised Xs. The Fine Art Society published impressions from the defaced plate in 1879. Later, someone tried to remove the cancellation lines, and printed more impressions, which are often mistaken for earlier states. This example is particularly deceptive because of pen additions to the hair, face and shading around both hands.