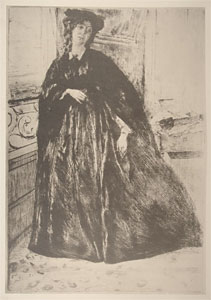 Whistler's friend, E.G. Kennedy, was a print dealer with Hermann Wunderlich & Co, New York. Kennedy's century-old illustrated catalogue of Whistler's etchings has provided a solid basis for further research. The Whistler Etchings Project will move beyond the limitations of this earlier catalogue by providing information on dates, subjects, and the extent of editions, and by clarifying and expanding information on states.

In the case of Finette, for instance, Kennedy recorded ten states, but there are several more. The reproduction shown here is the fifth state of Finette as reproduced by Kennedy in 1910 (the actual impression was later given to the Art Institute of Chicago (acc. no. 1938.1882).