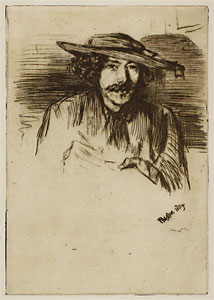 
In Paris, the 25-year-old artist, in his wide-brimmed straw hat, drew this attractive self-portrait directly on the copper plate. He was right-handed - but the image was, as always, reversed in printing. Whistler liked it and gave impressions to his friends and family. Later, it was eagerly sought after for exhibitions and fought over by collectors. Only about twenty impressions are known before the copper plate was cancelled.