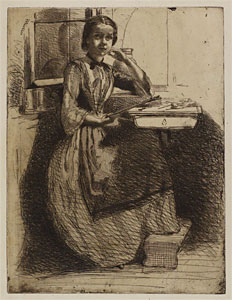 Years after he made this etching, Whistler wrote 'Gretchen' and 'Heidelberg' on an impression now in New York Public Library. Whistler visited Heidelberg during an etching tour in 1858, but this looks different from other etchings from that trip.

'Gretchen' is sewing or spinning - there is a ball of wool and needles on her worktable and she may be holding a spindle for spinning wool. This may show a scene from Goethe's tragic play Faust where 'Gretchen', seduced by Faust, is spinning by a window, waiting vainly for her lover.1. Goethe's play inspired Gounod's popular opera Faust. With Caroline Carvalho-Miolan in the role of Marguerite ('Gretchen' is a diminutive form of 'Marguerite') Faust opened at the Thtre-Lyrique, Paris, on 19 March 1859.2.

The opera may have suggested the title and subject of this etching, and Whistler planned to etch further subjects of popular culture. Meanwhile, 'Faust' continued to fascinate him, inspiring drawings during the 1870s.

There are only four known impressions of this etching. This one belonged originally to the Glasgow collector, Thomas Glen Arthur. It was bought by E.G. Kennedy of Wunderlich's, New York print dealers, whose stock books record selling it to G.W. Vanderbilt for $450 in 1902. The University of Glasgow acquired it in 1974 for the modest sum of 378.