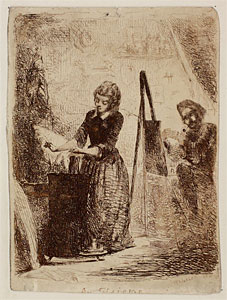 In Paris Whistler persuaded some fellow art-students, including E.J. Poynter and George du Maurier, to etch illustrations that could later be woven into a story. The project came to nothing. Whistler's highly detailed etching for the series shows a woman, modelled by his mistress, Eloise ('Fumette'), and an artist in a studio near the Ecole des Beaux Arts. This is one of only two known impressions, which were both given to family members.